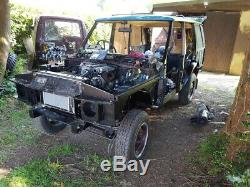 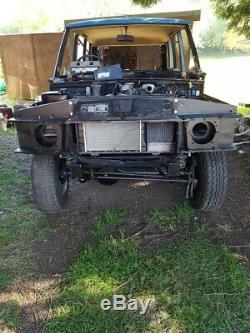 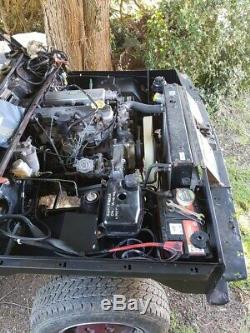 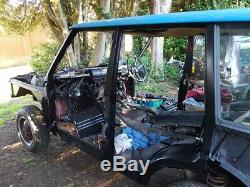 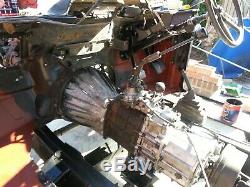 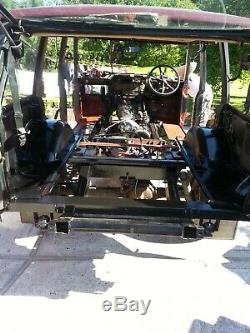 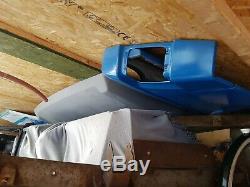 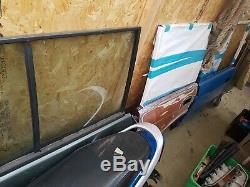 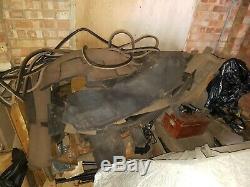 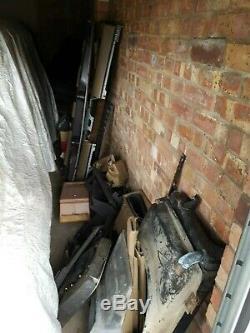 The first 3 pictures are the most recent, the rest are during the build & the burgundy one is what it looked like when I got it. It starts & drives, though there is no brake master cylinder fitted so only brake is the hand brake at present. When I picked it up it has a 3.0 turbo perkins diesel with a low ratio transfer box, this has all gone, I bought a rusty old 1994 discovery as a donor & fitted the engine & transfer box from that, the disco drove fine no whines or knocks, the engine hadn't long had a new head & has been a brilliant starter, even after being left for months at a time! I wanted to leave the long stick LT77 gearbox, but it had noisey bearings & worn ouput splines, so I fitted the LT77s from the disco, which was a reconditioned unit, and i swapped the selector components over to make it into a long stick, all bolted together with a new clutch & a stronger uprated clutch fork.

The chassis was very solid with only surface rust, so this was cleaned off & treated with red oxide & black hammerite, the only update I did to it was weld the front anti rollbar mounts to it as it had none. I also fitted the steering box & front axle from the disco as it was better than what was in there & it married up to the pump on the engine, & anti rollbar on the axle easier. For the welding, as with many of these things, I never intended it to be a big a project as it became, but the more I ground the more i found!

Probably best to just list it off, so welding, which I used new panels for the majority is as follows. Boot floor both sides (centre section is aluminuim). Rear arches, inners I used the good ones from the disco, outers were new panels. Inner & outer sills, new panels. Lower edges of B pillars. Most of the A pillars.

Mechanically, along with the new clutch as mentioned, I have also fitted New cambelt, water pump, radiator, top & bottom hoses. I also fitted the better heater unit from the disco. I also have a full silicone turbo pipe set, set of brake hoses, but they're not fitted to the car yet, plus I have the whole original interior, as well as the seats, dash, carpets. & door cards from the disco, both were beige, I was going to fit the disco dash, switch gear, seats & door cards as they're ergonomically better & more hard wearing, but its up to you what you fit, I have the disco wiring loom fitted, & was just going to splice it to fit the rear lights & rear wiper etc, I do still have the old loom along with everything else taken out if you wanted to put any original stuff back. I have all the body panels, I bought new pvc front wings, & a good 2nd hand drivers rear door as one was full of filler, some are rubbed down, some primed, others are poorly painted in the blue I was changing it to, the lower tailgate is rust free, I also bought a rust free 2nd hand bonnet, which is in primer.

Plus I have the windscreen out of the disco & a new rubber seal, yet to be fitted. I guess the best thing to do if you're interested is to come & view it, I'm in feltham near heathrow, its ready to build into whatever you want, original looking or turn it into a full on 4x4. The item "1983 Range Rover Tdi, project rust free, all welding done, all parts to complete" is in sale since Sunday, October 13, 2019. This item is in the category "Cars, Motorcycles & Vehicles\Classic Cars\Land Rover". The seller is "knoxville1979" and is located in London.

This item can be shipped to United Kingdom.